Have you ever been to space? If not, this is your chance to go to space. Play Astrix.io, the game made by IO games which takes place in the space. Go on a whole new adventure, explore what is up in the universe and fight all the odds. The game has amazing graphics and it is high resolution 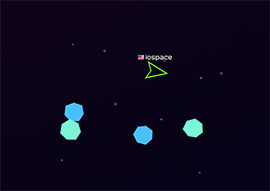 Enter your commander’s name to start the game. Move around in the space and shoot everyone and each and every thing that hinders your way to reach the top of the score board. Collect plasma on the map to make your ships bigger because bigger ships are stronger and less likely to be defeated.

The space is full of asteroids which are huge rocks, shoot and destroy them to power up. If another online player is chasing you, you may shoot him but if his ship is bigger, you can run away fast by using a boost. You can shoot power full missiles too. But missiles will take time to get filled. But laser bullets can be shot at any time.

Controls to play the game Astrix.io