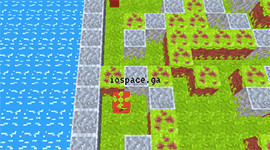 Similar to the indie-style bomberman game, Bombarena.io is an action-packed and fun game. You get to play with other online or computer-generated players, and the aim is to bomb them to pieces and get the highest score.

As you player of this game, you and seven opponents are put in a Minecraft-style arena and you are given a bomb. With that bomb, you are expected to destroy your opponents and dominate the arena. When you blast walls, you may find other bombs and bonuses such as powerups. You can also pick up bombs from the ruins of walls destroyed by other players. You may find extra bombs and XXL bombs in ruins of walls.

In trying to blow up your opponents, try not to blow yourself up too. The bombs have timers, and you should get out of the range of the bomb before it blows up. Some bombs also have longer ranges, so you need to be sure of your safety when a bomb goes off, or that could be where the game ends for you.

Each game is 10 minutes long, so you have 10 minutes to dominate your arena and attain the highest score. To win the game, your strategy should include getting your opponents to the place you want them to be when the bomb goes off. The more opponents that are killed by a bomb, the better your chances of dominating.

Your focus is on killing all your seven opponents and blowing up walls will help you as you go. The arrow and WASD keys control the movement of your character in the arena. The space bar is for dropping bombs. The space bar key is also the respawning tool.